When you get right down to it, level design is probably the most elementary part of game design, because it defines the actual player experience. Good level design can show you how to play, encourage experimentation, communicate the game’s story, immerse, motivate and much, much more. It’s pretty rad, and pretty damn intimidating.

Throughout the development of The Wizard, I dreaded to create new levels or alter existing ones. My main goal was to gradually introduce the game’s mechanics and offer interesting, increasingly difficult challenges. This I think I achieved. However, I also wanted the levels to be sensible, or at least somewhat believable, and I wanted them to tell a story. I tried my best, but I can’t say I’m completely satisfied. Most level only make sense if you look at them in isolation and don’t think too hard about it. I guess that’s enough for a silly game like The Wizard, but I just can’t help but wonder who would store their potions in a barrel, or where the dark elves go to poop. 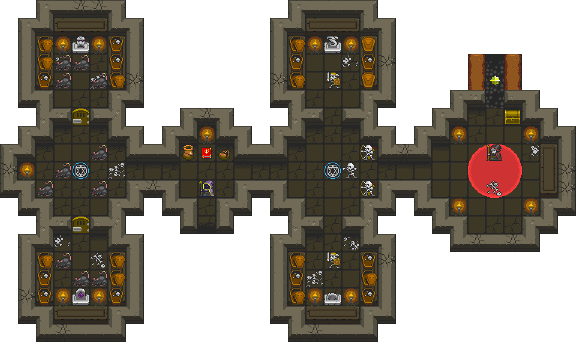 Meanwhile, only few levels manage to tell their own little story. For example the one of the necromancer who raids the academy’s tombs to build an army. They’re not exactly obvious and I doubt many players will pick up on them, but it’s something, a detail for those who pay attention to that sorta thing, and that’s nice too.

Of course Crabman and I discussed the design of the levels quite a lot, though it most often revolved around their size and difficulty. Early on in the development levels tended to be pretty big, with smaller levels in between to mix things up. We liked the big levels because they were more interesting and offered more choices for the players, but they were also more intimidating and, if the player died, more frustrating. One solution would have been to add save points, but we never quite came up with an approach that made us happy. Instead, I gradually reduced the size of the levels, all the while analysing the feedback of our testers. 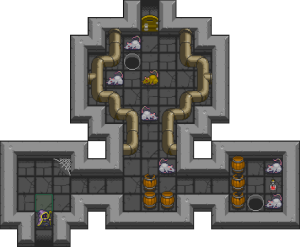 The game is divided into 5 chapters with 3 levels each. In each chapter, the levels usually increase in size and end with a big level containing a miniboss. This structure is very apparent in the last levels, but got lost in the first few. The reason for this are the countless alterations these levels went through.

You see, even before we tracked the sessions, we noticed that most of our friends would only play until the second level. So we decided to postpone the bigger, more open level and added a new, shorter one in between. This allowed us to see if the player had understood the things we had taught them previously without punishing them too much. But now most players stopped playing in the third level, and that didn’t even have a boss.

The first two levels had been very small and tutorial-heavy, while the third one suddenly confronted the player with a lot of freedom. Compared to the previous two, this level was huge and featured two new enemy types. Apparently, this was too much for new players. To dial it down a bit, I removed a quarter of the level and reduced the number of possible paths. I also made sure to increase the number of choices the player had more slowly. 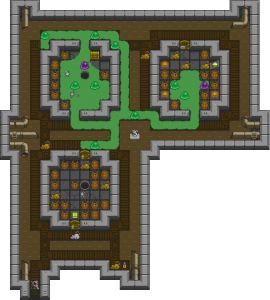 Case in point: In the first incarnation of the level the player started at the bottom centre at a crossing with no clear indication of where to go. Now the player starts at the bottom left, leaving only one way to go. Before they reach the first crossing, there’s a spellbook, which naturally grabs their attention, while the alternate paths are barren of items or enemies.

It’s not until after they have picked up the book and cleared the room containing it that the level starts to open up. The player is then presented with different paths that look similar enough to make them stop and think for a moment. Still, I made sure to make the shorter, slightly easier path more inviting.

Only at the end of the level this changes. Here the shorter and more obvious path is actually slightly tougher. This was to motivate players to think about their approach to a group of enemies, and to reward them for doing so. It’s not too a big difference though, so I’m not sure this really works as intended.

But adding a new level in between left us with a new problem: The former boss level was now the first level of the second chapter. This screwed up the chapter progression I had in mind, but it also prevented things from getting too predictable. 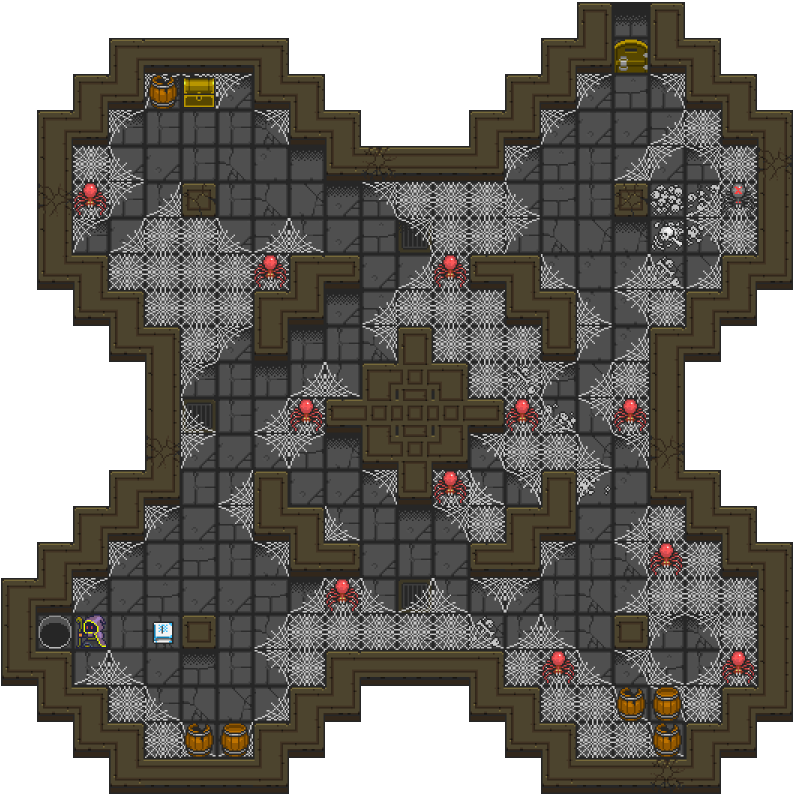 For the longest time, the level remained as it was. In fact, it stayed that way until we had definite proof, in form of the session logs we recorded, that the level had to be improved. As we had expected, many players got stuck there and quit. Crabman, ever the lazy pragmatist, suggested to just remove the boss, a black spider.

Sure enough, the black spider is a tough encounter. It is the first enemy that has enough health and does enough damage to single-handedly kill the player if he isn’t careful. But unfortunately for the players, I really liked that. It makes sure the players understand the value of the ice cone spell they found at the beginning of the level, which they often tended to underestimate. But using it cleverly, it’s possible to defeat the black spider without taking any damage at all. So instead, I again cut a part of the level and streamlined the path. This happened rather recently though, so we don’t know what players will make of it yet.

And now that that’s done, let’s get to the part that I’ve repeatedly promised to discuss over the last few installments of this post-mortem: How our wizard’s lost his face.

When we decided to make The Wizard a proper game, I showed Crabman this peculiar little character in Oryx’ Sprite Set. A wizard without a face! Yes, our wizard! Which means that, basically, he never had a face to begin with!

Anyway, I suggested to Crabman that maybe some kind of vile demon could have taken his face from him. He immediately took to the idea and turned the wizard into the exceptionally handsome Kevin, who was, in fact, so very handsome that he never got around to learning how to cast spells. That conveniently explained why the player had to collect and learn them in the first place.

Suffice it to say, I loved it. And that’s pretty much where my involvement with the story ended. I gave Crabman the go-ahead to make it as silly as he wanted, and he went and did just that. Unfortunately, that also means that I now have to live with the fact that the wizard’s name is Kevin. In the end though, I’m very happy with how the story turned out. Especially its conclusion. It’s quite silly.

And that’s it for the design part of The Wizard! Stay tuned for the next installment in which I’ll let you in on the chaotic, unlucky, and stressful parts of the development process that would soon follow. And remember, the game will be released tomorrow, so don’t forget to check it out!